Having had my share of experience as a real patient this year, I’ve now become a pretend one. 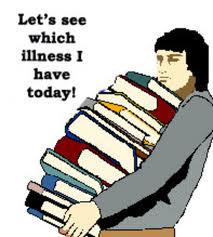 Or, as the barman at my local put it: “You’re being paid to pretend to be ill? It doesn’t work why I try it!”

So, at the induction, we were invited to role-play.

You have to remember what’s on your piece of paper – you’re Brenda/n,  in your early 50s, you were woken with an agonising pain which hasn’t gone away despite taking your partner’s pain-killers etc etc.

You don’t need acting experience – the only fellow “patient” I met with a performing arts background was more into music (piano) than drama.

Oh yes, and in answer to what I imagine would be another FAQ, you don’t have to undress.

I thought I was doing relatively well as I clutched my left side and writhed in agony before remembering the pain was supposed to be under my right ribs.

I also was told I had to remain as “Brenda” whilst giving my feedback to the student after the roleplay, even though I was no longer “in pain”!

On a serious level, it’s important doctors learn to be personable enough to get the verbal information they need from patients.

And it’s vital they get to practice in role-play scenarios – rather than on real, live people who could be very distressed.

(I do know people who have been examined in front of groups of medical students, who for whatever reason, have not felt in a position to refuse their “audience”).

But how many people do go into Medicine because they’re people-focused – or just academic high achievers?

Whatever the answer to this one – and I will leave this metaphorical question mark hanging in the air –  the students I met on my induction were really pleasant.

The woman I did my role-play with wanted to be a GP, another guy wanted to be a plastic surgeon (‘breasts or hands’). I’ve always been intrigued as to how doctors decide on their specialities, can’t you tell?

I’ve just realised this must seem a hypochondriac’s dream job!

So let me explain – for me it’s casual work to fit in with my freelancing – there’s been a lot of that recently, which, coupled with a laptop saga I won’t bore you with, has meant a drop in blogging activity.